Politically Incorrect: Pathos vs. The Psychopath 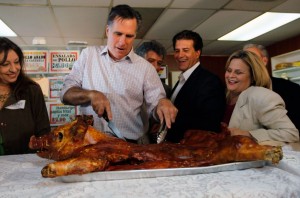 “Don’t stand around like friends at a funeral, eyes to the ground… it could have been you.”
– Crowded House

Upon having encountered this image several months ago, I immediately pinned it to a “Politically Incorrect” board on a social media site. It is offensive on many levels, but mostly in how it shows the seemingly inherent disrespect many humans have at present for members of other species (whether alive or dead). This lack of reverence for other beings is called “speciesism”, and is sadly an epidemic amongst humans in all corners of the globe.

This dreadful display of irreverence for our fellow Earthlings has also been passed around several times since then (along with Paul Ryan’s hunting shots) both by the “liberal media”, and also otherwise well-meaning animal advocates as reasons to NOT vote for these idiots.

Newsflash: The vast majority of these so-called “political leaders” are idiots!

The Obama Administration recently passed a law giving the green light for horse slaughter (and subsequent use of their corpses as “food”), and the president himself has also published a book where he recounts his experiences (including “flavour” and “texture”) in bodily consumption of dogs and other “uncommon” animals (as opposed to those traditionally consumed by humans as “meat” in the United States of America) – in a way I personally conveyed as condoning (or even glorifying) the killing and consumption of non-human animals.
Good grief, there was even a massive slaughter of all sorts of non-human animals which happened in Kenya as a “celebration” of his entrance into office!

Carnism is an incredibly vile act to behold (let alone practise), and I personally do not care for anyone who tries to shed any positive light on human perpetuation of such speciesist behaviour. That having been said, I also don’t care for anyone who practises carnism/speciesism, yet feels that it is okay to point fingers at others (political parties, etc.) for doing so. I am sickened beyond the point of words by this entire “political race” between greedy, corporate-controlled, dehumanised monsters; mainstream media-endorsed scoundrels who calculatedly misrepresent themselves as caring for “fellow countrymen”, yet show no compassion toward other species or even fellow humans with whom they wish to engage in pointless, immeasurably DESTRUCTIVE wars.

It is quite often that I feel extraordinarily ashamed to be part of the human species, especially having been living within the creepy confines of Western “society” for so long. However, I also realise that being born into any other genus, in the West or even anywhere else, would likely have resulted in a far more torturous life of enslavement and immeasurable, perpetual suffering without possibility to generate change on any truly measurable level.

A great deal of what I’ve endured thus far as a female of the human species has been arduous enough, and regret for my own existence has been something I have dealt with for so far back as I can remember. That having been said, I cannot even begin to imagine, nor adequately convey how horrendous things must be for other species who have no other choice but to exist amongst so many wayward humans on this troubled planet.

For those who may be left in wonder at this point, I have chosen a path of non-consent.
In other words, I simply refuse to accept as an option anything or anyone I find to be offensive or insulting to my intelligence or conscience.
If necessary, I will continue to live as far outside the present system of horrendous disconnect as possible, for as long as I find myself confronted by so many things with which I disagree.
Many may find such a proclamation to seem somewhat sensational, unconventional, and possibly even pointless. For those who do, I suggest taking some time to do a bit of research and reading for yourselves. Politically speaking, a fine place to start may very well be here.

Bad Behavior has blocked 31 access attempts in the last 7 days.