Anyone who has been acquainted (or even somewhat familiar) with me for any period of time will likely also be well aware of my nearly lifelong stance against Procter & Gamble & their vast array of low-grade, environmentally unsound products. Although the environmental impact is certainly a concern for me as an informed adult, my boycott began at an early age as a result of my interest in (and resounding repugnance at) the then-common practise of vivisection and subsequent rendering of corpses to generate more product ingredients. P&G has been torturing non-human animals in laboratories for decades, sacrificing millions of lives for the sake of gaining maximum profit using marginally safe ingredients of questionable origin.

Despite numerous appeals & suggestions from humane advocacy groups over the years, P&G has perpetuated these barbarous activities without mercy, remorse, or proper deliberation of reasonable compromise. Spokespersons for the giant corporation have frequently made empty promises to seek alternatives to cruel experimentation, yet continue to buy out numerous other brands & implement inhumane clinical research on newly acquired products. In addition to their normal methods of misleading consumers from behind a shroud of noted acquisitions, their highly suspect advertising methods now include some rather startling celebrity endorsements. I’m still wondering exactly how they managed to convince Ellen DeGeneres, a self-proclaimed vegan, to endorse their meretricious Cover Girl brand (and WHY she would have agreed to do so in the first place)…

Their newest ad campaign, which focuses upon mothers and families, seems to have left out one very vital detail worth careful consideration: 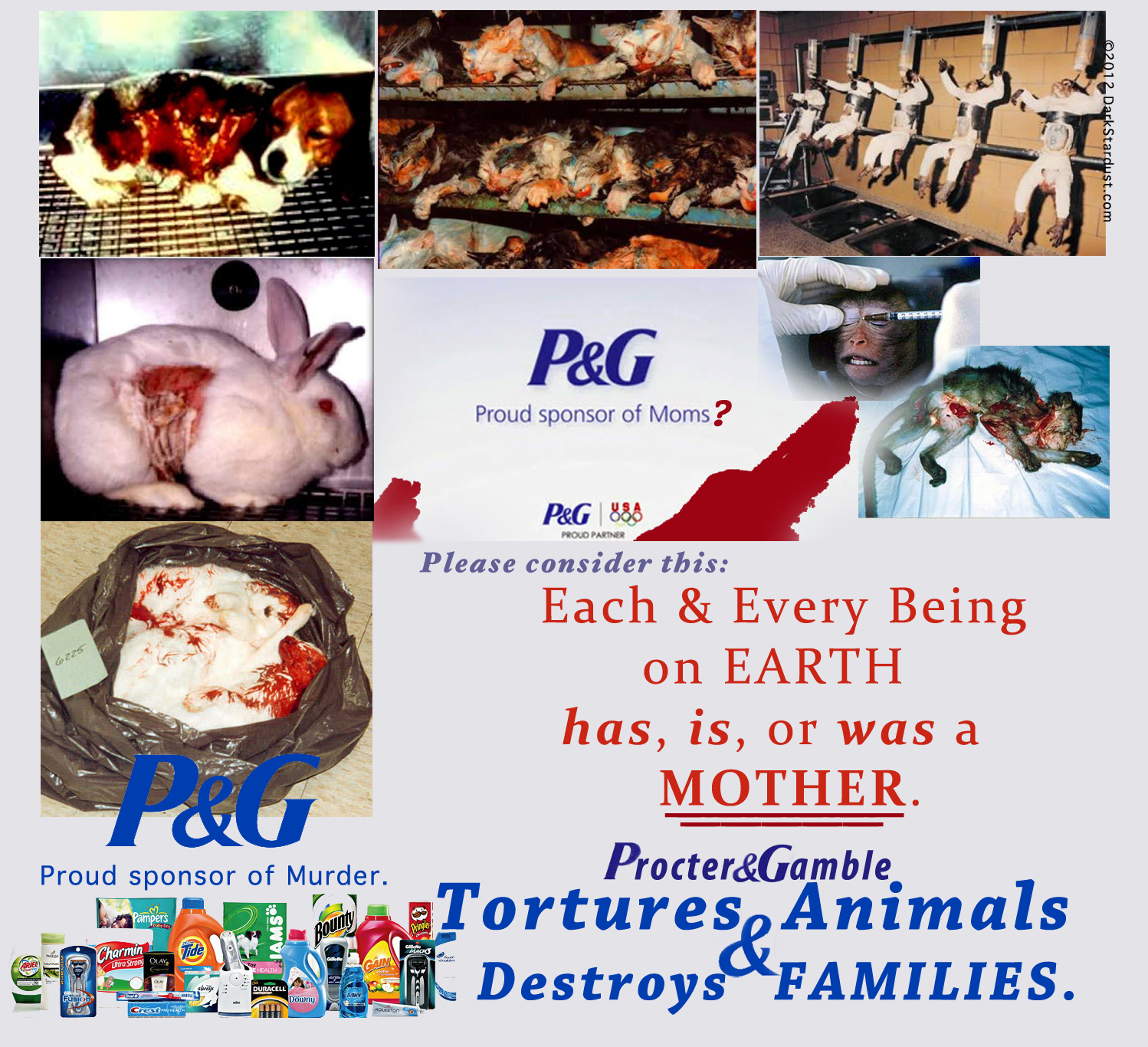 All of the living, breathing, sentient beings who have been tortured & die in their laboratory testing day after day have mothers too. Some of them are (or were) even mothers themselves, though these poor mums were likely never afforded the Universal right to become properly acquainted with the children to whom they give birth.

Despite the brief spell of outrage initially felt at having happened upon the new “family-oriented” slogan, I do sincerely hope that the aforementioned relationship between Procter & Gamble and Ellen Degeneres may be some sort of indication that the company is on the brink of some monumental changes for the better. I can think of very few scenarios more delightful than hearing news of immediate steps being taken in a more environmentally conscious, forthright, and (most importantly) humane direction.
All living beings are born into family and unique consciousness; therefore each one is deserving of equal consideration, regardless of species, gender, creed, or pigmentation. Destroying one being for the sake of another is immoral and unacceptable policy, of which I pray to see an immediate end.

Bad Behavior has blocked 103 access attempts in the last 7 days.