Discrimination and Propagation of Violent Behaviour

Luka Magnotta, aspiring model and low-budget adult film actor, is in some very serious trouble. He has been connected with several cases of horrific animal torture & killing, and is also wanted by Canadian law enforcement in connection with the murder of at least one human being (apparently he is also potentially implicated in (an)other murder case(s)). The former should have been a warning sign of the latter becoming an imminent possibility, and action should have been taken immediately upon discovering the abuses.

However, society’s seemingly ever-present refusal to accept non-human animals as being valid, sentient beings with as much right to live in peace as any human has been an unfortunate accomplice in many similar cases.

Magnotta has subsequently fled North America, and is now wanted by Interpol as well: 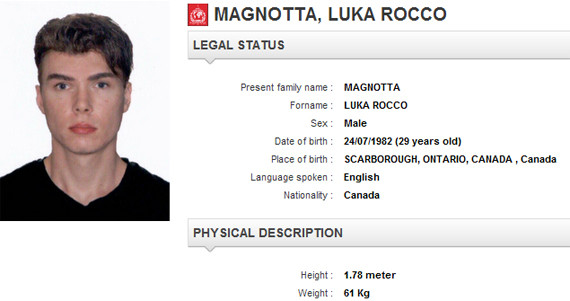 For me, this particular case carries eerie echoes of Jeffrey Dahmer’s gruesome tale, especially considering the fact that each one of these disturbed individuals ended up taking the lives of same-gender lovers, violating corpses, etc. after having become known for a penchant toward violence toward other species… 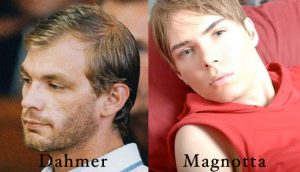 Dahmer’s unsavoury activities began in childhood, possibly as a way of punishing others for his own inacceptance of the unique self he was likely in the commonly awkward process of discovering. The self-perceived inability to “fit in” can be very difficult for a child, and unconventional interests/thoughts/behaviours (particularly in relation to sexuality) are often met with reactions of exclusion and persecution by ignorant members of “mainstream society”. Quite often, such persecution appears in the form of violence, tactics of intimidation, and unrelenting public humiliation. For some who find themselves unable to constructively work through the pain and anger which frequently appear as products of such experiences, regrettable reactions may be comprised of uncontrolled rage and violence toward those deemed more vulnerable than themselves. Such reactions, from my perspective, can serve little purpose other than to create even more emotional pain and torment in the individual who carries them out.

I had a look at some of Magnotta’s social media after reading some news of his criminal behaviour, and noticed a certain mob mentality being expressed in commentary from other visitors. Such statements such as “SICK BASTARD I HOPE YOU DIE,” and “MURDERING (sic), ROT IN HELL” seemed to be the consensus, in addition to various scattered comments (some relatively complimentary, others not so much) relating to his appearance. It was enough to make me feel genuinely bad for the guy! In fact, I found such internet trolling from so-called “peers” to be disturbing enough to compel me toward leaving a comment of my own. I can only imagine that such reactions were a regular part of Magnotta’s everyday life, and many of his actions may have been a reactive, defensive way for him to handle such negativity.
Many may ask, “What does a person’s sexual orientation have to do with violent, criminal, irrational, or otherwise immoral behaviour?”

Generally speaking, there is always a link to be found between a person’s actions and disposition in life in relation to the way they are treated.

My Universal supplication for today is for all of us to find the strength within ourselves, allowing us to take a much-needed moment consider all possible factors in any given situation.

Mob mentality is neither productive nor beneficial when brought against individuals, even if the presentation of events seems horrendously grim and utterly wrong. There are more rational ways of handling such situations, without resorting to perpetuating the hatred which likely led to the initial enactment of such horrible crimes.
Even after having seen the kitten snuff video (which I found to be utterly deplorable and greatly upsetting) I simply cannot imagine any positive end resulting from vigilante “witch” hunts. Hurting someone who is already so obviously disturbed can never bring those kittens back (and may even cost the world more defenseless babies).

There are so many horrific atrocities occurring on our planet at present, and the only way I can see for us to be able to remedy such a vast amount of injustice toward all beings (including our living Earth) is to work toward healing ourselves with inner peace.

The Golden Rule is a wonderful way to begin this process.

Bad Behavior has blocked 57 access attempts in the last 7 days.