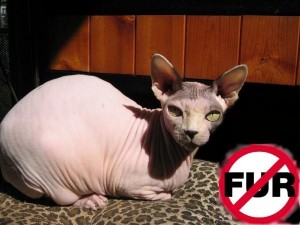 Having read through very recent statements posted by Kathy Ireland regarding her blatant disregard for freedom, well-being, and right to life for non-human animals, I realise that there is really no point in feeding her with any more energy in form of appeals to wake up to reality & stop using fur. I recently read through some statements from her which directly attacked several prominent activists who attempted to appeal to her self-professed “charitable nature” by urging her to disengage in use of fur trade activity and related sales. She appears to exhibit textbook psychopathic behaviour by way of attempting to shift attention away from herself (& questionable ethics); at one time praising film icons of the past who engaged in wearing of furs, and subsequently accusing activists of publicity seeking by way of appeals. She then proceeded to perpetuate the debate by engaging in negatively charged exchange with several misguided individuals who were toadying for exactly what she had accused activists of seeking: attention. As to be expected, these frivolous attention seekers seemed more than delighted to receive a virtual pat on the head for expression of disregard for non-human life.

In my opinion, Ms. Ireland is certainly NO Audrey Hepburn! It should also be perfectly obvious to anyone with a shred of common sense that women in the past were far less privy to information related to such matters than we are in present day society. There is simply no excuse for (feigning) ignorance!

Witnessing much of this was quite bothersome, and I am incredibly tired of seeing PeTA’s shelter kills being cited as justification for other (completely unrelated) atrocities. While I am no fan of PeTA, I find ignorance of this magnitude to be nothing short of inexcusable. However, I opted to refrain from becoming any more involved in pointless debate and simply researched a bit more:

From what I have read, it seems that the callous, has-been fashion model is presently denying accusations of generating monetary gain from sales of animal fur cruelly obtained from breeding facilities. She claims to believe that fur farming is “humane”, and goes on to state that all proceeds from sales will go to “Kathy Ireland Worldwide”, her so-called “benevolent fund” established with alleged intention to benefit non-profit organisations.

If this is indeed the case, anyone who recognises non-humans as valid beings with rights to their own lives should take the time to find out exactly which “charities” will be benefitting from this blood money so that we may BOYCOTT them. Proposing a boycott on Kathy Ireland’s ill-begotten products is simply stating the obvious, especially considering the fact that she’s been using child labour in Asian countries for YEARS without any sign of remorse. There is simply no reason to buy anything endorsed by this empty minded, shell of an excuse for a human being, though one might imagine that her name would not cross any of our minds for any reason (other than having plead with her to curb these unethical practises). That having been said, there is really no reason to waste time and energy by converting it into negativity and outrage at her seemingly soulless disregard of common ethics toward Earth & other inhabitants. Instead, why not convert this energy and time into something positive by seeking and spreading word on charities of integrity? It seems far more constructive to support those who strive to make a difference without resorting to accepting blood money, who do not endorse, support or otherwise engage in corrupt or unethical activities.

Make a difference for all beings & our planet: Boycott Kathy Ireland Worldwide and ALL affiliated non-profit organisations.

Our human experiences on this planet are occurring on a very limited timeline. Let us use this time to create something positive for ALL, instead of relinquishing our will to the undeserving.

Find out what you’re supporting if you wear fur: 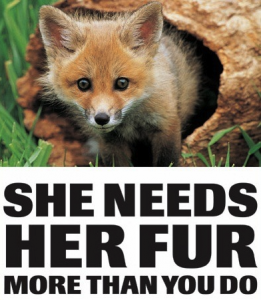 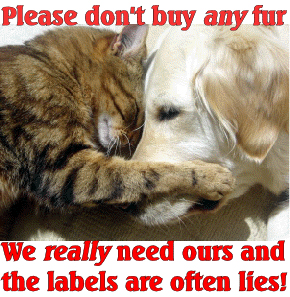 Shortly after this post was made, another blog was brought to my attention by one of the aforementioned activists who have taken it upon themselves to address this nasty business with Kathy Ireland (the others being the Barbi Twins, formerly of Playboy fame). Amy Rebecca (a.k.a. ‘La Belle Nuage‘)  primarily focuses her energy on strong opposition to the fur industry by way of her Fur Free L.A. campaign. Her follow-up post contained a great deal of relevant (and priceless) points & information, so I asked her permission to add hers to this blog as a follow-up to mine. Amy very graciously granted my request, so below is another piece of the puzzle related to sussing out exactly where Kathy Ireland’s “benevolence” lies:

Kathy Ireland and the Case of the Twisted Fur Logic

As I mentioned in my previous post. I find it more than annoying when others refer to my work as PETA. Kathy Ireland claims that PETA is going after her. If Kathy did any research like she asked, she’d know PETA is not attacking her. I AM. I am FUR FREE LOS ANGELES. Got it? I started the petition. Look, it says “petition started by Amy Rebecca.” Guess who? I designed the posters flying around the internet with the little “Fur Free LA” at the bottom. And I’ve been joining other outraged animal lovers in the “twitter wars” over her sale of fur.

I have tried to follow the money, but the trail is twisted. Stay with me now. What Kathy failed to mention is who exactly the money is coming from and exactly where it’s going. She says “an amount equal to proceeds” is being given away. We don’t know if the “proceeds” means wholesale or retail. She touts her worldwide retail sales as $1.9 billion, but her personal income, while still hefty, is actually a mere fraction of that number. She makes her money by selling the use of her name, and she is linking her name to the sale of fur. Her collection of fur for American Legend is sold exclusively to Macy’s Fur Vault. So it’s the price American Legend sells their fur to Macy’s–not the retail price to the public– which they are going to give away. 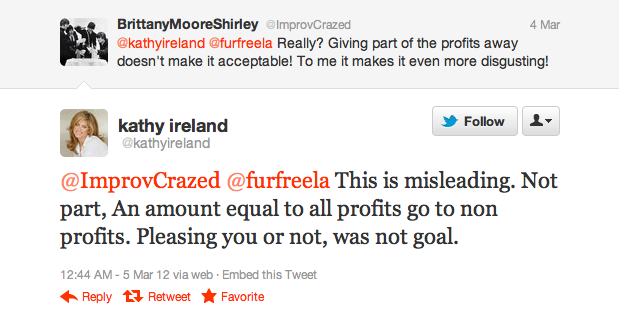 But WAIT! Now Kathy is claiming “an amount equal to all profits” is going to non profits. Which is it, “proceeds” (the sales amount) or “profits” (a much smaller number)? The problem is that Kathy Ireland Worldwide is a privately held L.L.C. (Limited Liability Company). That means there is no public information about its finances and its contributions to non profits. I could try to dig, and dig, and dig and still find next to nothing about how much is actually going to non-profit.

Here’s something we do know: American Legend is part of the Fur Commission USA, which is a NON PROFIT! With the question in the air of how much is going to non profits, I’m left bewildered about which non profit those proceeds are going to? Because without public record, and no details forth coming, one has to wonder is the money going back to the fur commission? Okay Kathy, why don’t you reveal exactly where the “amount equal to proceeds” from the sale of your fur is going? I don’t mean the list of charities you tout on your website. I mean, this specific amount is going to this specific non profit. I use the word non profit because YOU did. You didn’t say charity. The fur commission is a non profit.  So is that where the money goes? 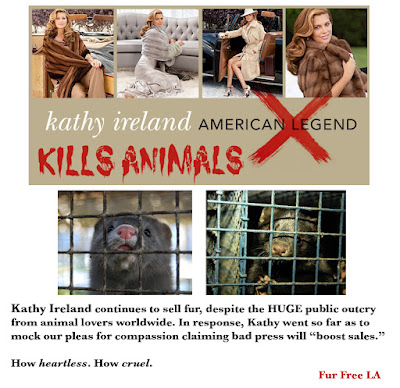 The bigger issue is not how much is going to a non profit or a charity, but the fact that this money is tainted. You can’t make up for violently killing minks by giving away money to “non profits,” whatever they are. And could it be that these donations are being made to the non profits that were responsible for killing them?

Nothing justifies the death of those animals. Not even throwing your pro life beliefs into the conversation. If you want to talk about the sanctity of life, how does 30 million fur farmed animals being killed for fur coats fit into that?

Whether or not Ms. Ireland & company continue to callously deny the value of non-human life, voices compassionate individuals should weigh on her conscience (or ego, at the very least) if driven in great number. Even if only to appeal to her sense of avarice, please support the campaign against this cruelty by signing this petition at Change.org. Each & every voice makes a difference for animals, human and non-human alike.

Peace, blessings, and much gratitude to all for having cared enough to read both of our posts.

One Response to Bloody “Benevolence”

Bad Behavior has blocked 42 access attempts in the last 7 days.